When I was a morbidly obese schoolkid obsessed with sports but devoid of even the remotest physical skills or desire to engage competively, I instead chose to hit my “home runs” via the competition to read as many books in our public school library as possible.  I quickly learned that the 796 section, back in the days of the Dewey Decimal System, was there the sports titles were.  At least twice a week, I’d scour the card catalogue to see which new titles had come through.

At the time, basketball wasn’t as big a deal to me; my hovel was a baseball home first, a football home second and a domestic violence home third and beyond.  I think I read Ted Williams’ MY TURN AT BAT, and Arnold Hano’s biography of Sandy Koufax at least twice, all in the name of scoring the four books necessary to hit a “home run” and get my name posted on the library’s bulletin board.  In the league of obsessive readers, I was Babe Ruth, Hank Aaron and Tommie Agee rolled into one.  But even I was growing bored, and frankly was getting tired of being beaten up by jealous classmates who saw me mount an insurmountable lead in the reading competition.

So I took a break and vowed that until a new book came in, I wasn’t going to pad my total.

Then the biography of Bill Russell came in.

I was familiar with him because the first meaningful games I watched on TV turned out to be his last as a player-coach, the run to the 1968-69 title that took out the Los Angeles Lakers in seven thrilling games.  If I recall correctly, the book had been written right after he had been named as Red Auerbach’s replacement and became the first Black head coach in not only the league’s history, but the first in the history of North American professional sports.  And the first to win a championship.

I devoured that book in less than a day.  I was amazed to learn he grew up in Oakland, a high school classmate of both Frank Robinson and Johnny Mathis.  He won back-to-back NCAA championships with the University of San Francisco, hardly a school that when I discovered them was nationally prominent.  I read how he was drafted by the St. Louis Hawks, who traded his rights to the Celtics before he played a minute.  The Celtics were one of the least racially integrated franchises in a league dramatically different in pigmentation nearly 65 years ago than what it is today.  For Russell to emerge as a hero, let alone the choice to break through the Negro (don’t chide me, that’s what it was called then) coaching barrier, he needed to excel at a level far beyond that of others.

You think 11 championships in 13 seasons was a strong enough resume to qualify?

Sure, there are nearly four times as many teams now as when Russell began.  But that also means that the players that made up those teams were. as units, way better proportionately than many doormats of this era are.  Russell merely emerged as the pre-eminent rebounder of all time, and almost always denied Wilt Chamberlain any post-season success, matching up often with him in playoffs.  While Chamberlain set scoring and rebounding records in the regular season, Russell practically dominated the post-season.  No wonder the league’s MVP trophy is named in his honor. 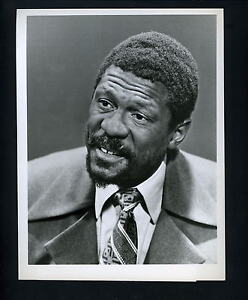 My more enduring memories of him were as a broadcaster, where he teamed with Chris Schenkel on ABC’s Sunday afternoon games in the ’70s, and later on CBS with Brent Musburger.  Bill would rarely hold back on his opinions, and was particualrly outspoken about racial injustice.  But no matter how inflammatory his statements could be, he’d inevitably hear or see something that would make him laugh.  His CACKLE was hypnotic.  His candor refreshing.  His style inspiring.

When he attempted coaching comebacks in first Seattle and then Sacramento later in life he had little patience for the gamesmanship and childish antics that way too many talented players exhibited.  When he’d leave, he’d be brutally honest about who treated him right and who wronged him, and encouraged countless others to do the same.

When Barack Obama awarded him the Presidential Medal of Freedom 11 years ago, is was a far more deserved honor in that case than, say, Rush Limbaugh.

As the tributes roll in today from all over the sports–no, the ENTIRE–world, I realize I am hardly someone who can honestly say I’d be immediately recognized as someone he influenced.  But please believe that, as a player, coach, broadcaster, and human being, there’s nary a personality that impacted me more. 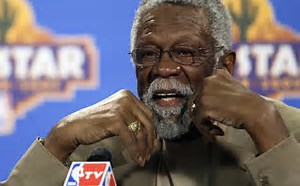 And now, at 88 years of age, but somehow still too soon, he’s a physical part of our past.

When you look up in the rafters of the Garden in Boston next year, you’ll see 23 retired numbers, in tiered rows on placards since there’s not enough room for that many jerseys.  Russell’s is #6.  I don’t think there’s anyone who has ever experienced him that would argue that, for eternity, he will be #1.