As I’ve shared before, I attended college in the small town of Oswego, New York.  For a city boy like moi, for me the experience was as much sociological infusion as it was coming of age.  I learned first -hand what it was like to consider the Ponderosa Steakhouse gourmet dining, how to dust off a foot of overnight snow as a mere flurry and how to actually have a quality life when your annual income is well below the national median and the nearest major league franchise is several hundred miles away.

SUNY Oswego may be an afterthought in the overall landscape of colleges and universities, certainly the Ivy League, Big Ten and Pac 12 megaschools so many of my colleagues and friends call their alma maters.  And certainly, there are college towns that produce warm memories of community and simplicity that are more noteworthy than a town like Oswego.  Many of those schools and towns are awaiting the official launch of March Madness season of later this month, when the Big Dances of basketball and hockey will be announced, once again (thank G-d) students and alums will trek to regional sites around the country, many others will convene in Las Vegas to gamble on the games, and at least one rite of spring for sports passionistas will take place. 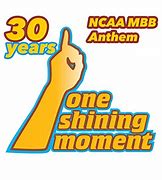 But that’s for Division I schools.  For Division III, those pursuits have already begun.  And today, both the men’s hockey and men’s basketball teams will engage in post-season games looking to advance in their respective pursuits.  Arguably, it’s the biggest sports day of the year in Oswego.  And for a change, basketball is equally as prominent as hockey.

When I got to Oswego, men’s basketball was a joke.  The team was a laughingstock in its conference, coached by a clueless lifer whose drills often began with the critical insight “Now they got the ball, and we want it.”.  He didn’t actually have many plays designed to achieve that goal, and a majority of the players he coached lacked the skills to execute them.   But I was a basketball fan, and tickets were free, so I went to the games.  When I arrived at Oswego the team was in the middle of a 20-year drought between conference championship games, and at the nadir of that drought at that point.  During my first three years as a student, the team went a combined 7-64.  And there was even an asterisk attached to that.  The seventh of those wins was in a tournament consolation game against Queens University of Ontario, who was invited by a small Vermont college that hosted it.  While it counted as a regular season win by the conference and the school, it was later learned that the NCAA did not officially recognize wins against non-U.S. colleges.  So by the time Thanksgiving of my senior year rolled around, the team had lost 44 consecutive NCAA games.  One short of the all-time record held by Olivet College of Illinois (yes, even decades later I can rattle this off).

Naturally, this provided the ideal opportunity to pursue my dream of being a public address announcer.  No one else wanted the job.  The highlight of my tenure was an 86-82 four-overtime loss to Oneonta State on a horribly snowy night (even by Oswego standards) in January 1979.  I counted the size of the crowd at game’s end. It was easy.   It was six.

So with that legacy as a backdrop, it was actually exhilarating to see my Lakers advance to this season’s second round with an 82-73 win over the Hood Blazers (no, I had never heard of that school before yesterday, either).  A 15-0 run late in the first half, as well as a 14-2 surge in the second, secured only the fourth first round win and sixth overall NCAA tournament win in school history.  Today, at 5:35 pm, the Lakers will seek their third Sweet Sixteen ticket in their history against Keene State of New Hampshire, which upset the host Swarthmore College team in yesterday’s nightcap. 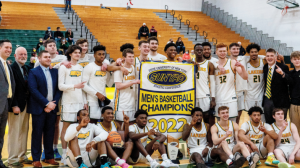 Men’s hockey is still the premiere sport at the school though and tonight the team will travel to Geneseo to face their current arch-rival, the Ice Knights, in the SUNYAC Conference championship game.  With a win, the team will capture their 11th all-time conference championship and punch their 19th all-time ticket to the NCAA tournament.  I am proud to say I was there for the first conference title in 1980.  At the time, the conference title was a regular season accomplishment, but it did earn a bid to a tournament run by the now-defunct East Coast Athletic Conference (ECAC).  Oswego hosted its first ECAC playoff game against Army, which competed on the Division I level in virtually all other sports.  Its coach, Jack Riley, had coached the U.S. Olympic team which had won the 1960 Olympic gold medal the last time the U.S. had hosted the Winter Olympics.  So, it was arguably our version of a Miracle on Ice when the shell-shocked Cadets, fuming at the ridiculously undersized rink surrounded by chicken wire and not plexiglass that Oswego called home,were chased back to West Point with a 12-6 loss in the first round.   Riley ordered his team off the ice during the game’s final minute, and with Oswego up by six goals at the time the game was declared over after 59 minutes.  Yes, Oswego had sent the U.S. Army into retreat, 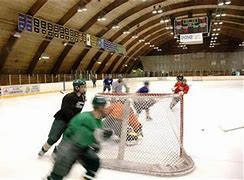 The Lakers then beat Middlebury at home and, finally, arch-rival Plattsburgh on the road to win the ECAC tournament.  But at that time the NCAA D3 tournament had only eight teams, and the ECAC was considered a weak conference and thus had no automatic bid.  We stayed home.  Our coach, Herb Hammond, then resigned and became the coach of the Plattsburgh team we had just defeated in what the NCAA committee considered a meaningless tournament.   So much for miracles.

The Lakers are decided underdogs tonight.  Geneseo, 21-3-1. is a top three national program and defending conference champions.  The Lakers, 18-6-1 and not even in the Top Ten, lost two regular season games to them earlier this year.  This had been billed as a rebuilding year, with 21 new players (2020-21 was lost due to COVID) including many who had never played any college hockey at all.  Getting this far this year has been seen as a quite pleasant surprise.   A competitive loss to such a quality opponent may still qualify the Lakers for another NCAA tourney invite.

So while there may be only a couple of thousand people across the world who will be tuned in to these games tonight on a Twitch site near you, know I’ll be one of them.  I’ll be wearing green and gold.  And likely shivering a bit less than those in Oswego tonight.