Giving It The Old College Try

I watched two hockey games played in on-campus arenas online last night.  The first was played at the Cooler in Geneva, New York, where my alma mater Oswego State opened their season against host Hobart.  The second took place in Tempe, Arizona, where the NHL Arizona Coyotes opened their home season.

The Coyotes drew only 4000 more for their opener than the Statesmen did for theirs.

So with those figures in mind the idea of an NHL team playing in a rink designed for a college team may seem preposterous and on the surface the circumstances that put them there would strongly suggest a team that should get out of Dodge, or at least Arizona, ASAP.  But as The Atlantic reported earlier this week, the back story, and the upside of keeping this team, which had been relocated from Winnipeg in 1996, in a market with the potential and location of Phoenix, told a different story: 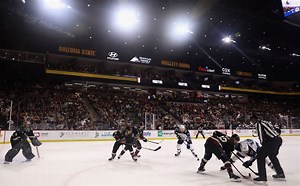 The Coyotes surely would have preferred to stay at Gila River Arena while building their new rink. But in August of 2021, the city of Glendale essentially booted the Coyotes from the arena, opting out of their joint lease agreement with the team. The team and the city were uneasy business partners from the beginning, and things only got more acrimonious over the past couple of years as the city demanded outstanding payments from the Coyotes. In fact, in December of 2021, The Athletic reported that the city threatened to lock the team out of the arena because of unpaid bills and a $1.3 million delinquent tax bill.

Without a home, the Coyotes struck a deal with Tempe and Arizona State to play at their new arena, which still isn’t entirely completed. As part of the deal, Coyotes owner Alex Meruelo invested at least $30 million to build an annex to Mullett Arena that will house two NHL-caliber locker rooms, as well as offices and other facilities for the Coyotes. The Coyotes also helped fund some upgrades to make it an NHL-ready rink, which included a replay booth and technical improvements to ensure the quality of the ice. That annex is still under construction, and won’t open until at least December. When the Coyotes leave for their own arena, Arizona State will get to take over the annex, a heck of a going-away present.

Phoenix is a key media market, and the Southwest otherwise unoccupied for a league looking to grow its footprint.  It’s also a big winter travel destination for obvious reasons, especially for Canadian snowbirds and, during spring training, for fans of 15 major league baseball teams who conduct their spring training in the area.  And despite the fact that the current team finished dead last in the Western Conference last year, even behind the expansion Seattle Kraken, their TV ratings aren’t the worst in a league that already only has access to just 21 U.S. media markets.

The Gila River Arena’s Glendale location is  deep into the suburbs, where younger fans with disposable income don’t frequent, and unlike colder climates where families raise rink rats and will flock to games in such locales, a losing team with high ticket prices isn’t a great value proposition.  The Coyotes couldn’t fill a large arena.  But Tempe is close to Phoenix’s center, and the popularity and success of the Sun Devils despite the fact they are the only Pac 12 school that fields a Division I hockey team was enough to justify the building of what is now known as the Mullett Arena, with its just short of 4900 seats and 187 standing room spots.  And judging by at least opening night, there’s at least enough appeal to sell out such a venue.

With irreverent giveaways of actual mullet wigs, the presence of former Coyotes captain Shane Doan and his son Josh, now a member of Arizona State’s team, jointly dropping the ceremonial first puck, and the presence of the second incarnation of the Winnipeg Jets as their opponents, the intimate setting was raucous, lively and the game entertaining.  Mullett Arena is still in the final stages of construction, so few home games are being played early in the season.  After the New Year, though, the schedule kicks in in earnest.  During the spring training window 14 home games will be played, giving visitors and even players from hockey-loving areas a place to go, a way for some more frustrated season ticket holders to potentially unload their seats for a few quick bucks should the Coyotes’ futility continue as expected and, most importantly, keeping the NHL here rather than, say, Hamilton, Ontario or Quebec City, which are both clamoring for NHL cities.   With all due respect to their passionate and parochial fan bases, though, they are less valuable to the league even if they can sell twice the number of arena seats than the ASU compromise and, eventually, the new larger rink will be.  Respectfully, those Canadian hamlets’ total value to the NHL are in the ballpark of Geneva, New York. 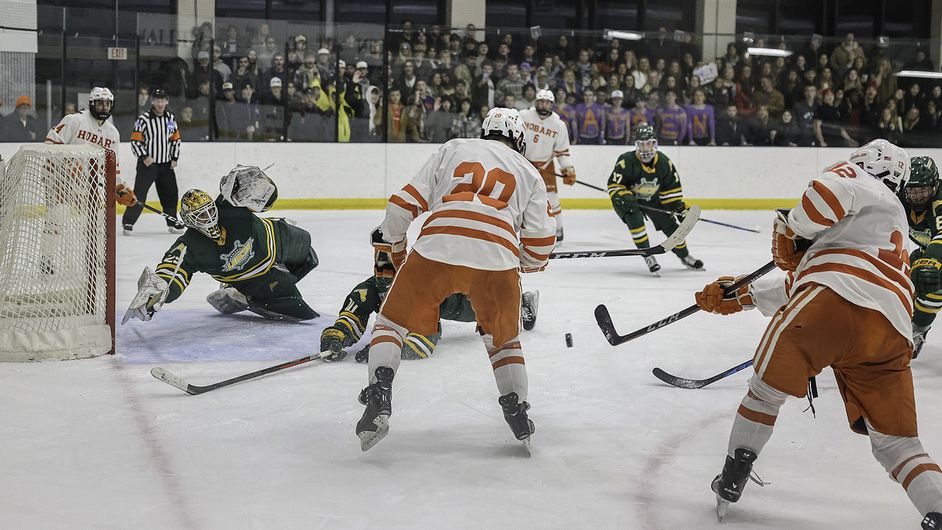 Hobart beat my Lakers and, unfortunately, Winnipeg spoiled the Coyotes’ home opener with a 3-2 overtime victory.  And, indeed, there may be nights ahead when fans at Mullett will come disguised as empty seats.  But they’re playing for the future, and helping to grow the popularity of the sport in Arizona as a whole.

It’s worth a shot, and hopefully a few thousand zealots will help them take it.