G! They’re Back In The Post-Season!

When the New York Football Giants finally began to part ways with the great Eli Manning, they had hoped the transition would have gone smoother.  When they drafted Daniel Jones out of Duke with their first round pick in the 2019 NFL Draft, they had thought they found an heir apparent.  When they upset Tampa Bay in Week Three after his first start, Giants’ fans hopes were uplifted ever so briefly.   While the 2019 team struggled, Jones had a few more decent starts and he became an offensive captain as Manning faded into retirement.

Then reality, as it often has for the G-Men in years of late, set in,  Jones had significant injuries in each of the next two seasons, the Giants continued to sputter, and the team ultimately decided not to exercise his fifth season option, meaning 2022 was a make-or-break season for both Jones and the team.

But under a new coach, Brian Daboli, and a new vote of confidence from an unafraid leader with experience in Alabama and New England, Jones finally found his mojo.  When he engineered a road upset of Tennessee in the season opener, with Daboli electing to go for a game-winning two-point conversion in the final minute rather than settle for overtime, Jones’ confidence and gamemanship reached new personal heights, and for the most part, they’ve stayed the course. 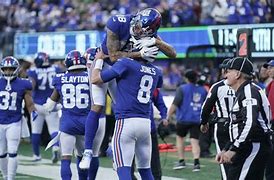 And yesterday, in their final home game of the season, the G-Men reached their goal of a return to the postseason for the first time in 2016.  While beating the woebegone Indianapolis Colts 38-10 wasn’t big news, it was the way Jones did it that was.  Two passing touchdowns, two rushing touchdowns.  91 yards on the ground.  If Saquan Barkley, running back extraordinaire, can be among his leading receivers, why couldn’t Jones be among the leading rushers?

And the overjoyed MetLife Stadium crowd no longer was mocking Jones with taunts of “Danny Dimes”, mocking his pedestrian short-toss gamemanship under the likes of the disappointing Joe Judge.  As he triumphantly headed into the first sunset of 2023, they roared his full name “Daniel Jones!”  “Daniel Jones!”.

We know how they did in the post-season.

The Giants haven’t had many post-season home games even when they were winning.  But they won two Super Bowls in five years under Manning despite that.  And with the NFC as wide open as it is, and with the likes of the schizophrenic Minnesota Vikings and the Brock Purdy-led San Francisco 49ers as their likely first-round opponent, who knows how far this team can go? 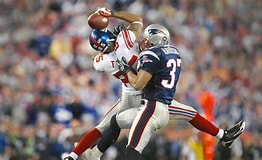 Super Bowl 57 will be played in the same Arizona stadium where Manning connected with David Tyree so unexpectedly to lead the bottom-seeded Giants to an upset win over the heavily favored New England Patriots in 2012.   Perhaps it may be a bit too much to expect an encore like that.

But you never know.  After getting past this hurdle, Danny Dimes could easily turn into Danny Dollars.  And the G-Men have served notice that, if anything, they won’t be an easy out.

New York is back in the postseason at long last.  Thank you, Mr. Jones.