At 8:55 pm ET last night, on the Paymar Stadium field in Cincinnati, Buffalo Bills’ second-year safety Damar Hamlin made a jarring tackle on Bengals’ wide receiver Tee Higgins as the Bengals were driving for what they were hoping would be a second touchdown in a game they already were leading 7-3 with less than six minutes to go in the first quarter.  With a chance to vault ahead of the Baltimore Ravens for undisputed possession of first place in the AFC North, and with a Monday Night Football audience watching the proceedings on both ABC and ESPN, tens of millions of fans getting in what they thought would be the last vestiges of a 19-day run where at least one football game, college or pro, was being televised nationally, were eagerly watching.

Then, all of a sudden, absolutely none of that mattered.

At that moment, as Sal Maiorana and Ryan Miller of the Rochester Democrat and Chronicle reported: 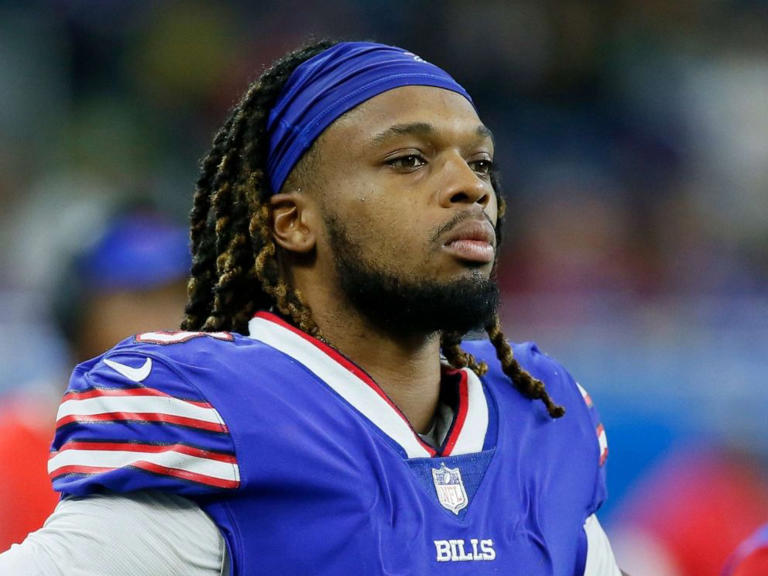 Hamlin, the Bills’ second-year safety, made a jarring tackle on Cincinnati’s Tee Higgins after a short pass, and after getting to his feet for a second, collapsed to the turf.

The Bills training staff rushed onto the field as it would for any other injury, but it was clear immediately that something was terribly wrong.

Within minutes, a stretcher was called for, but then the trainers had to begin performing CPR and that went on for several minutes as Bills players stood in disbelief, many openly crying.

Within 15 minutes of his collapse, Hamlin was loaded into an ambulance and rushed to the University of Cincinnati Medical Center. There were unconfirmed reports that he had a pulse but was intubated and not breathing on his own.

There was a brief discussion between Bills coach Sean McDermott, Bengals coach Zac Taylor, and the game officials regarding what to do. At that point, the teams left the field and the game was officially postponed at 10:03 p.m.

There was no word on when it would be resumed.

And as of this writing, there still isn’t any word.  Because all we now know is what the Bills’ official statement detailed a couple of hours after this tragedy unfolded on live television, as Yahoo! Sports’ Frank Schwab wrote:

The Bills announced his diagnosis of cardiac arrest early Tuesday morning, hours after he left the stadium in an ambulance.

“Damar Hamlin suffered a cardiac arrest following a hit in our game versus the Bengals,” the Bills announced via a statement. “His heartbeat was restored on the field and he was transferred to the UC Medical Center for further testing and treatment. He is currently sedated and listed in critical condition.”

The fact that it took the NFL more than an hour to decide to postpone the game indefinitely speaks volumes about the league’s degree of paranoia regarding the rash of on-field injuries this year related to concussions.  After the debacle on the same field in Cincinnati earlier this year where Miami Dolphins’ quarterback Tua Tagovailoa was allowed to return to a nationally broadcast (well, streamed) Thursday night game despite after suffering what was clearly a concerning hit, the NFL is more than a tad sensitive about any further embarrassment about their precious sport being impacted by impact.

One can almost imagine there was a sigh of relief among some league officials,when Hamlin’s diagnosis of cardiac arrest was announced.

But, in actuality, to date the only on-field death that had previously occurred in league history was due to an eerily similar diagnosis posthumously attributed to Detroit Lions’ receiver Chuck Hughes.  Shamefully, many reporters covering last night’s proceedings failed to have either the memory of or the instinct to google what happened at Tiger Stadium on October 24, 1971.

But yours truly did, and this is what we found:

Late in the 4th quarter, with Detroit trailing 28–23, the Lions were driving into Chicago territory and Hughes, who entered the game as an injury replacement, caught a pass from quarterback Greg Landry for 32 yards and a first down at the Bears’ 37-yard line.

Three plays later, Landry threw a pass that tight end Charlie Sanders dropped near the end zone. Hughes, a decoy on the play, began running back to the huddle with 1:02 showing on the clock. Suddenly, he dropped to the turf clutching his chest around the 20-yard line.[3] Hughes collapsed near Bears linebacker Dick Butkus, who saw him begin to convulse violently on the field. Butkus motioned to the sideline frantically to get Hughes assistance.[6]

Both teams’ doctors and trainers, along with a physician who happened to be attending the game, ran to Hughes to try to save him. An ambulance was called for and arrived to take Hughes to Henry Ford Hospital, where he was pronounced dead at 5:34 pm that afternoon. He was 28 years old. The game was played to its conclusion in front of a now-stunned silent crowd in Tiger Stadium, with the Bears’ lead holding. The Lions awaited word of Hughes’ condition after the game and the players were informed once word had broken that he was dead.

That game was near completion, and was televised only regionally on a Sunday afternoon.   So even under such circumstances, back then the game did indeed go on.

As it has through the countless devastating injuries we’ve seen in subsequent years.  When the Jets’ Dennis Byrd was wheeled off the field.  When Darryl Stingley suffered permanent paralysis when Jack Tatum tackled him during a pre-season game.  When fog, snow and even worse weather permeated through stadiums.  When coronavirus prevented fans from attending games live in a majority of venues.

This time, at long last, the priorities of life and safety prevalied over more trivial issues like playing a highly anticipated (and, frankly, playoff-crucial) game to its conclusion.

Right now, the only thoughts are for football fans, of any team, and, hopefully, any human being with a shred of decency to pray for the full recovery of Damar Hamlin as he fights for his life.

Don’t you worry about that game.  The NFL has already demonstrated its ability to pivot its schedule on a dime and to get millions of people to watch on short notice.  Back in November 2020, during the height of the pandemic, they actually played a game on a Wednesday afternoon.  After two COVID-related delays of a Ravens-Steelers game originally scheduled for Thanksgiving evening, the teams finally played an important game, and more than 11 million people watched on NBC.  Nearly 43 per cent of all households with a television watched in Pittsburgh.  Knowing what I know about Buffalo fanaticism, let alone upstate New York weather patterns, I wouldn’t be shocked if their local ratings eclipsed that, even if the game eventually gets played at 8 o’ clock in the morning.

Especially if Damar Hamlin is healthy enough to watch along with them.

Heaven can wait for him.  Chuck Hughes does not need company in his sadly unique portion of NFL history.

And, at least for one night, the NFL showed that something else besides the final score matters.

Pray for Hamlin, to be sure.  But pray the NFL finally takes note of this as they move forward as well.