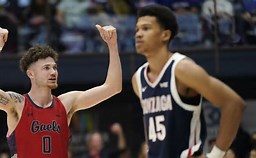 On a day when spring training was supposed to start but did not, the other sure sign warmer days are ahead, the peaking of the college basketball season, took center stage in a way that was like no other day in recent memory.  Each of the top six ranked teams lost.  From early morning, when Michigan State knocked off Purdue, until late at night, when top-ranked Gonzaga fell to St. Mary’s, fanatics and gamblers rejoiced and reviled as upset alert after upset alert pinged on devices and drove even casual viewers to the closest available screen to see shocked fans and players celebrate their unexpected success.

The beauty of this is that eventually virtually none of this will matter.

Division I college basketball has relied upon a Top 25 strictly as a regular season marker to determine which of the 150-200 games played on a given Saturday will get top billing on the myriad of networks and plusses that are devoted to its coverage.   The more impactful rankings come from “bracketologists” like ESPN’s Joe Lunardi, who at this time of the year take center stage as the go-to sources of emmis that will give some context to Selection Sunday two weeks from today.

As Lunardi pointed out, the fact that all of these top teams lost on the same day was the equivalent of an NFL Sunday winding up with a slate of ties.  Little movement will ultimately occur in the rankings of these teams.  And since all of them have conference tournaments that will precede the actual tournament, with many of those top seedings already determined by their overall regular season, even those seedings won’t be close to being set until at least the 48 hours prior to March 13.

If anything, Saturday’s results only reinforce that even more storylines worth watching are unfolding.  Will the quality wins that the upsetters achieved make a difference in their eventual seedings or even if they will make the tournament at all?  Will there be rematches of these games in those conference tournaments, with revenge an additional motivator for the vanquished?  Will the Cinderella storyline of the highest-ranking team to win Saturday– #7 Duke — be enhanced as Coach K heads towards his career end chasing perhaps another title? 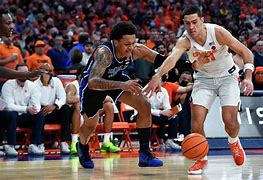 What makes March Madness so compelling are exactly these sorts of debates based upon this quantity of results.  In cities and towns on campuses large and small hope springs eternal, particularly when Championship Week is looming.  Before the Final 68 are determined the overwhelming majority of the 350 D1 schools will have at least one post-season game.  Many will be played in the morning or early afternoon in a nearly empty arena far from home, with only their teammates and a handful of essential support personnel cheering them on.  In the pandemic era, many teams have played in those conditions and at those times of day more often than in other eras.  The chances of an upset that can, as it did yesterday, create alerts that drive people to screens to check out frenetic finishes is that much higher.

And every time it does, regardless of how ephemeral the results may ultimately prove to be, it reinforces why March Madness is so crucial to the passage of seasons to passionate sports fans.  Why when it abruptly shut down midway through many of those conference tournaments two years ago was so jarring.  Why last year’s compromises of bubbles in Indianapolis and San Antonio were so healing, even with limited crowds.  Why the chance to have these tournaments return to full arenas and congregational cities is so anticipated.  And thanks to a unique confluence of events, we got the chance to start it three days early.