Not only was I geographically pre-destined to be a Mets fan, growing up in a baseball-obsessed apartment within walking distance of Shea Stadium, but being overweight was an additional signpost that I was genetically pre-disposed to liking them.  For much of their existence, the Mets have often had overweight players perform key roles for them, with surprisingly agile athletic skills given their physiques.

To see a flabby gut, all the more exaggerated when the Mets’ white pinstriped tops were tucked in,  hanging over their belts was a silent nod to a fan base that, like me, lived for hot dogs smothered in Gulden’s spicy brown mustard, soft swirl ice cream in a royal blue mini-helmet, and a cold extra dry Rheingold poured from what must have been the heaviest back pack carried by any vendor anywhere.  When you could root for someone who looked like they had just indulged in a few of those vices themselves, it made them all the more endearing.

Just before the era where Seaver and Koosman led a championship rotation, the Mets had a starting pitcher named “Fat” Jack Hamilton.  Hamilton was considered a top acquisition for the 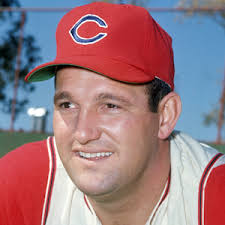 1966 Mets, with four years’ experience in the American League, the very definition of mediocrity. In May of that year, Hamilton tossed a one-hitter, only the second in the team’s short history.  It was one of the first games I recall watching on TV, and the Mets’ historic broadcast team of Lindsay Nelson, Ralph Kiner and Bob Murphy were disbelief.  Unsurprisingly, given Fat Jack’s girth, the one hit for the Houston team he defeated was a bunt by opposing pitcher Ray Sadecki.   Let’s just sat Sadecki was never known for his speed. 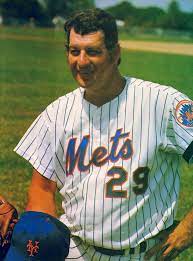 A decade later, the Mets brought over another portly American Leaguer, Mickey Lolich.  Popular ’73 National League championship team leader Rusty Staub was salary dumped to Detroit in exchange for Lolich. who in slightly slimmer form won three World Series games for the Tigers as they shocked the baseball world with a seven-game Series victory in 1968.  The version the Mets received was reportedly 300 pounds, was a modest 8-13 in 1976 and chose to retire after the season to open up–wait for it, a doughnut shop.  It was hard to cheer for him.

An older, puffier version of Staub returned to the Mets as a star pinch-hitter just in time for their ’80s renaissance.   Given his legacy and his love of food (Staub operated a popular ribs restaurant on the Upper East Side of Manhattan, seeing this version of Staub was both a throwback to their last good run and a reassurance that letting one’s self go wasn’t a deterrent to success.

And then, there was Bartolo.

Colon, who already had a more than a decade of success elsewhere before the Mets scooped him up in 2014 as a 40-year-old reclamation project, became one of the standouts on the squad’s run to the 2015 World Series, and the next spring became immortalized by becoming the oldest MLB player to hit his first major league home run.  To be kind, Colon more often made contact with a table trying to negotiate his way into a tight restaurant booth than he did with a baseball holding a bat.  When he somehow belted a pitch in San Diego deep into the stands, play-by-play announcer Gary Cohen called it the greatest moment in the history of baseball.  Not quite Kirk Gibson, but definitely more surprising.

But now someone who does make contact, who looks the cross-breeding of the DNA of Colon and Staub, has come along, and he’s Flushing’s newest Fat/Phat hero.  Daniel Vogelbach, picked up last month from Pittsburgh as part of the DH platoon refresh, has quietly become the Mets’ newest fan favorite.  Yesterday’s home run was his third in 18 games with the Mets, where his .308 batting average is 79 points above the pace he had with the Pirates, and his .419 on-base percentage ranks among the top 10 in the league.  He is listed as 6 feet 270, but a comparison of the guts on him and Colon (a reported 285 when he hit his dinger) suggests his stats may be just a tad off.

The Mets were lambasted for not making more aggressive trade deadline moves that they did.  Vogelbach, fellow DHer Darin Ruf and Reds outfield castoff Tyler Naquin were their big acquisitions, not exactly Juan Soto.  But they are all productive, and the Mets also saw immediate dividends with the respective returns of set-up man Trevor May, he of Kelso, Washington (YAY!!), and, of course, some dude named deGrom.

As they head into a critical four-game series with the resilient Braves in Atlanta that begins tonight, they have a 5 1/2 game lead on the division, and what would be an important first round bye if that holds.  Thanks to Vogie and the others, their lead is padded enough where they won’t lose their first place status even in the unlikely event of a sweep. And Vogie’s ability to get on base will help offset the chance of that happening even more.

Yes, their lead is padded, much like Vogelbach’s waistline.  But as someone whose own gut has shrunk substantially recently, but who is still hardly svelte, it’s one thing to be fat.  It’s another to be PHAT.  And we Mets lovers are merely swelling with pride.