Every Rose (City) Has A Thorn.

I’ve absolutely fallen in love with Portland, Oregon, the so-called “Rose City”.   My best friend lives nearby, I’ve met some truly amazing people beyond said friend, rekindled my love for Pacific Northwest salmon and microbrews and almost don’t mind the persistent dampness and rain.  When the sun is out, it’s arguably heaven on Earth.

About the only thing it lacks are several major league sports teams.  The winter months are covered by the Trail Blazers, who are off to a competitive start despite some obvious desire to “brick for Vic”, as many struggling smaller-market NBA teams may choose to do this season with French super prospect Victor Wembanyama as a potential top draft pick.  The summer lacks baseball (though the Mariners aren’t that far, and, this season, were worth the drive), but it does have soccer.  Portland LOVES soccer.  The Timbers are a franchise whose legacy dates back to the NASL of the 1970s, and the reborn version is competitive in MLS, especially when they have their “derby” rivalry games with Seattle FC.  There was clearly an opportunity for growth with the women’s game, so when the NWSL was established in 2013 the Timbers’ ownership quickly established a beachhead with the Thorns, and they promptly won the league’s first championship and began a lovefest with the city.  They won a second title in 2017, and have been one of the league’s more successful franchises through its first decade.

But, as the world has learned of late, while a healthy love was developing with the Thorns’ players and their fans, some of those in charge were developing a far unhealthier love.  As USA Today’s Emily Olsen reminds:

The Portland Thorns defeated the Kansas City Current 2-0 to win their third NWSL Championship in front of 17,624 fans Saturday at Audi Field.

“Today was not about doing anything extra,” coach Rhian Wilkinson said after the game. “It was about showing up and playing with … real joy.”

But as I watched the perennial powerhouse Thorns swell with pride and tears under the gold streamers and whizzing fireworks, I realized I’ve written this story before.

Team A in the professional women’s sports league came together during difficult times to defeat Team B, overcoming not only the opponent but off-field issues perpetuated by their own organization.

What has happened in the NWSL — and frankly women’s and men’s leagues around the world, as Thorns coach Rhian Wilkinson pointed out before the game — has robbed players and fans of the unbridled joy soccer can bring.

“It’s a horrible thing to say. This is not only about soccer. It’s not about the NWSL,” Wilkinson said before the game. “It’s not just about women. It’s everywhere. And it’s a problem everywhere.”

“We talk about it a lot as a team, just to play with as much joy as we can,” Thorns goalkeeper Bella Bixby said. “It’s easy to go into a game and get stressed and forget that this is a game, that it’s meant to be loved and meant to be beautiful.”

The “team of destiny” story surrounding the (2021 NWSL champion Washington) Spirit last year was just the lead.  Former North Carolina Courage coach Paul Riley, who was with the Thorns from 2014-15, was fired after reports of sexual coercion and abuse.

Last year, Portland had to publicly deal with reading about their former teammate Mana Shim’s abuse and the Thorns’ front office and the league’s failure to protect her.

And, as ESPN’s Jeff Carlisle recounted, even in celebration the Thorns were forced to deal with the realities of the ongoing fallout and still-unresolved cries for justice:

Not only were the allegations made against former manager Paul Riley featured prominently in the Yates Report, but Portland executives, including owner Merritt Paulson, came in for heavy criticism as well. The organization’s president of soccer, Gavin Wilkinson, and president of business, Mike Golub, were fired. The ensuing weeks saw Thorns fans demanding that Paulson sell both the Thorns and MLS side the Portland Timbers — even after he stepped down as CEO — and the Thorns owner chose not to attend Saturday’s final. 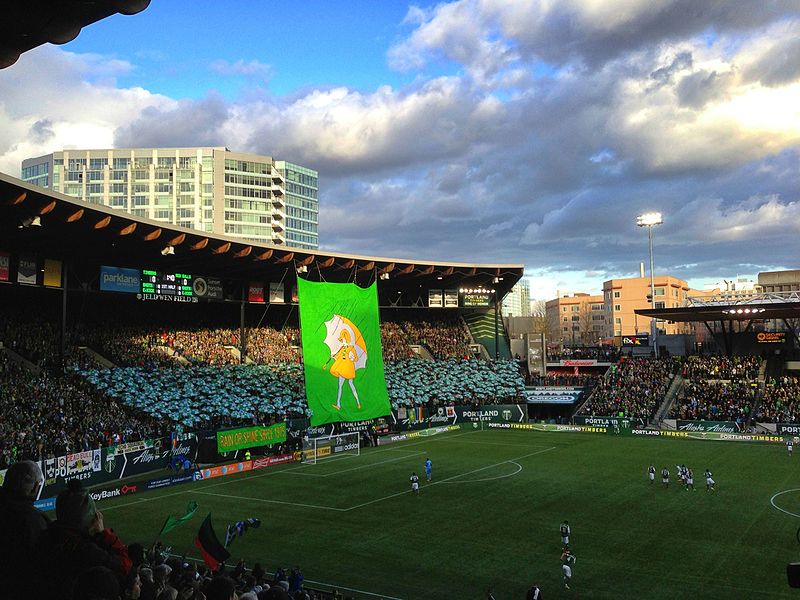 There will likely be a celebration in or near Providence Park, the ancient home of Portland soccer, this week.  The Thorns have won more titles than any NWSL team and their composure and class through personal adversity is admirable.  There will be roses everywhere, and few will be more deserving of them than the likes of league MVP Sophia Smith, who gave the Thorns an early lead in the fourth minute of last night’s championship match in D.C.,  as well as veterans like Becky Sauerbrunn, Meghan Klingenberg and Christine Sinclair.  Frankly, Coach Wilkinson deserves a few bouquets of his own as well.

I’d like to offer everyone who will fill the parade route and who sat in the stands this season a rose of their own, for being so passionate, so beautiful, and so rewarding.  You deserve a champion this inspiring.  I’m so glad you have each other.  Thank you all for letting me join your lovefest.