When the NHL season resumed in the twin Canadian bubbles of Toronto and Edmonton in August 2020 it began an unprecedented period for the then-103-year-old league.  For the first time in its history, meaningful professional hockey would be contested in the summer.  And it probably connected me with the game more than ever.

I’ve always been most attracted to the underdog; the more atypical or unusual the occurrence, the more fascinated I was.  The summer of 2020 was far and away the most eventful–and uneventful–months of my life, and when professional sports finally resumed in late July after slightly more than four months where little but Korean baseball and documentaries were airing I was especially grateful.  But baseball had merely been delayed, and basketball has always had a summer season, although none as meaningful as the one that got played out in Florida.  Pro football actually got held back until fall as pre-season games were cancelled; college football games were sparse and mostly limited to the Southeast and Southwest at the outset.

Hockey, on the other hand, was making its summer debut.  WIth a 24-team tournament spread out over two time zones, it meant they were games on almost round the clock for the first couple of weeks of August.  I caught up with teams and names that I had long ignored with the passion of a reborn child,  And the Tampa Bay Lightning were especially prevalent. 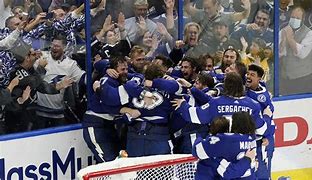 They won a summer tournament in 2020 that actually extended a week into the fall.  They won last year a day after Independence Day.  And this year they extended the 2022 season into a third consecutive summer conclusion, totalling more than 70 playoff games in total in the process.

But tonight, with a tense 2-1 come-from-behind win, it is the Colorado Avalanche, and not the Lightning, that emerged with the Stanley Cup.  For the first time since 2001 the league championship resides in the Mountain time zone.   The Avs won 72 games in total this season over a nearly nine month stretch that was further elongated by a regular season stretched out by a planned Olympic break that instead became a Covid makeup arc.  No other team in NHL history has won as many games in both regular and post-season as did these Avs.

With no Olympics upcoming, the NHL has already announced that next season will begin in mid-October and conclude in early June, just like it used to.  That will also likely mean pre-season games will commence roughly around the first day of fall.

So for now it’s farewell. summer hockey.  I’ll try to be as good a foul weather fan as I was fair.  And congrats to the Avs fans, too.  It should be a heck of a parade.