Don’t Cry For Them–Argentina. The Truth Is They May Have Blown It

Leo Messi has been the face of Argentine soccer since 2004, even though he left the country for Spain at the age of 13.  He’s as famous for his prowess in La Liga, as a champion with FC Barcelona, and, for the past two seasons, as the face of Paris St. Germain in the French Ligue 1.  But when it comes to the highest level competitons, Messi dons the powder blue and white of his homeland, and has typically been reliable.  Indeed, Argentina had not lost an international competition in over three years, in 36 matches.

And to the most unlikely opponent imaginable, at least on paper.  Saudi Arabia, ranked 51st in the world per FIFA and 31st in this year’s draw (behind even host nation Qatar), somehow scored two spectacular goals on a mere three shots and pulled off what Gracenote calculated to be the longest shot victory in World Cup history, 2-1, before a giddy, Saudi-partisan crowd.

Messi did indeed score Argentina’s goal, a 10th minute penalty kick that gave Argentina an early lead, his seventh World Cup goal in a record-equaling fifth different year.   But then Argentina’s offense lagged for the balance of the match, and via the legs of the now-immortal Salem Aldawsari, the Saudis pulled off a victory that, more than 90 times out of 100 in simultations, would never have occurred.

So how did this happen?

Well, the Sun (yes, the British tabloids do have good reporters), offered up one possible explanation, which is actually based on some sound reporting from last week from a solid U.S. online entity:

The Athletic reported this week that the Paris Saint-Germain hitman had inked a £25m a year deal with the controversial country in May.

And the Saudis in attendance at the Lusail Iconic Stadium made their feelings known as the all-time great took to the pitch for their Group C clash.

A requirement for Messi’s deal with Saudi requires him to promote the country.

Footy fans were quick to comment on the controversial deal with Saudi, which has a long history of human rights abuses.

Another said: “Messi has a lucrative deal to promote Saudi Arabia and now he’s playing against them today, no greater promo than this.”

The Saudis are on a spending spree which many in the Western Hemisphere consider sportswashing, beginning with the LIV golf tour that has thrown hundreds of millions of dollars behind male professional golfers, and is indicating they will do the same with women.   The amount of money invested by its smaller neighbor Qatar to secure this year’s tournament, despite its well-reported use of migrant workers to construct the stadia these upsets are being held in in record time, is equally staggering.

And, as the Athletic’s report added, intriguingly, -the battle for the 2030 hosting rights involves a couple of very intriguing countries: 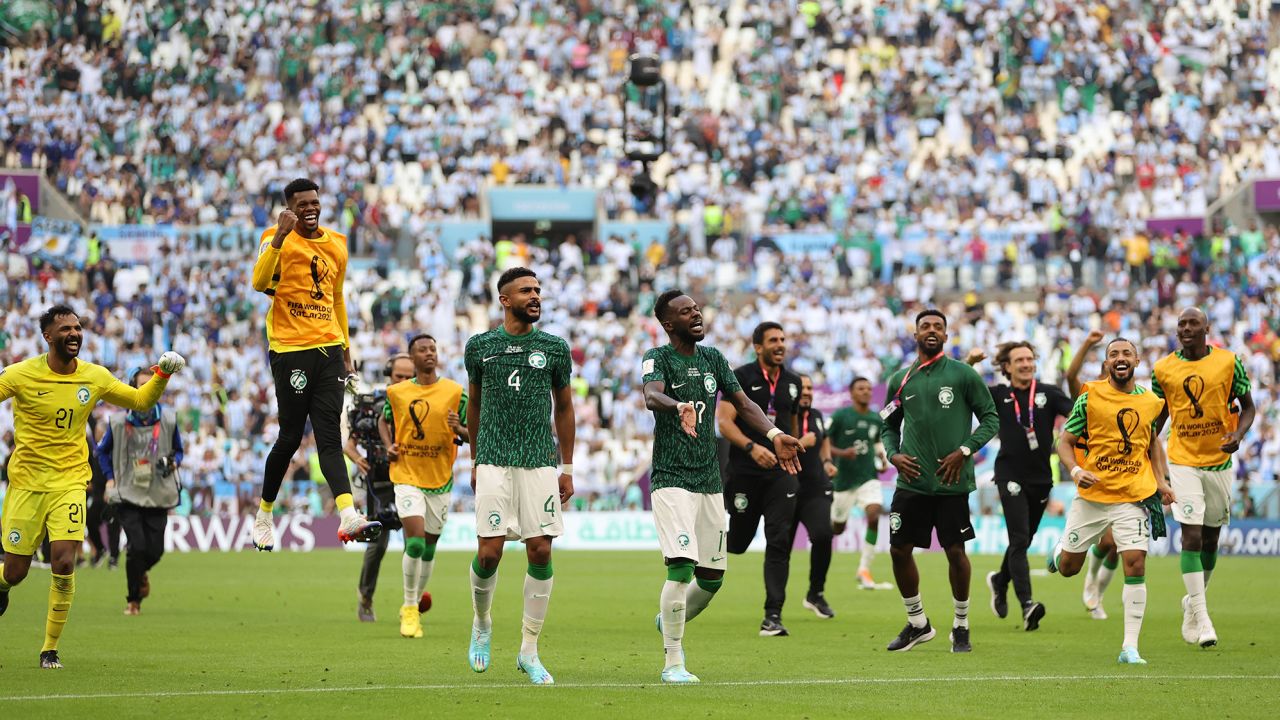 Argentina versus Saudi Arabia at the World Cup in Qatar. A battle for early supremacy in Group C, yes, but also the prelude to a battle off the field that will take place in the coming years.  The 2026 World Cup will be held in the United States, Canada and Mexico but bidding for the 2030 edition opened in June this year with the eventual winner to be selected at the 74th FIFA congress in 2024.

The only confirmed bid so far is a joint initiative by Spain, Portugal and Ukraine, which was announced earlier this year. However, two rival proposals are due to be formally launched.

One will be a South American co-production comprised of Argentina, Uruguay, Paraguay and Chile. The other will be a combined effort by Saudi Arabia, Egypt and Greece. The use of multiple countries within bids is explained by the fact the World Cup finals will become a 48-team competition from 2026.

“A South American bid for 2030 is very strong,” its co-ordinator Fernando Marin told The Athletic. “The region is a generator of talent that expresses itself all over the world. Additionally, on the 100th anniversary of the first World Cup in Uruguay in 1930, it would be a fitting location.”

In 1930, hosts Uruguay won the tournament, beating Argentina 4-2 in the final.

But in a world (and World Cup) where money talks louder than tradition, and with Messi reportedly wanderlusting his way to the United States and MLS after this ends to help MLS launch its global deal with Apple TV+ as a face of a league hoping to generate attention from beyond North America (which will certainly help the Cup’s chances to be bigger this time around than it was in the U.S. in 1994), might the psossibility that Messi and his Argentine teammates maybe–just maybe–didn’t quite chase victory as aggressively as they otherwise might have?

It’s certainly an uncomfortable truth, and plenty of North American journalists would dismiss it as folly.  They might be among the ones who might have believed Phil Mickelson couldn’t be–or shouldn’t have been–bought. To be sure, the format of World Cup is such where even a loss like this may not be fatal.  Argentina–and Messi–can still be one of the top two in their Group; Mexico and Poland played to a scoreless draw later today, proving neither is an overwhelming threat to a path that will allow Argentina to advance.  And they’re likely not going to play Saudi Arabia again.  So this could work out yet.

But if this somehow makes the Saudis seem more formidable to FIFA in ways beyond just their bankbooks, and potentially costs South America the centennial World Cup, Messi might yet have something to really worry about.

South Americans don’t like losing anything regarding the World Cup.  Just ask the family of Andres Escobar.

You remember this nugget from the U.S.’ surprise run on their home turf in ’94?:

Escobar, known as “The Gentleman of the Field,” accidentally put the ball in his own net in a game against the U.S., contributing to Colombia’s rapid exit from the Cup and a massive national disappointment.

Ten days later, the 27-year-old Escobar was shot dead in a Medellin parking lot in a killing that sparked national outrage.

There’s a documenary crew following Messi around producing a work called MESSI’S LAST CHANCE.  It’s being promoted heavily by The Athletic (ironically) on its Soccer Show podcast feed, and it sounded compelling even before today.

It just got a lot more so.

So no crying, fans–at least not yet.  Check in on Saturday, though.