\James Harden made a triumphant return to the New York metropolitan area yesterday, just days removed from his deadline day trade out of the hell he perceived Brooklyn to be and now rejuvenated as a member of the Philadelphia 76ers.  Reunited with the fanboy that just happens to be his boss again, Sixers GM Daryl Morey, Harden scored a triple-double in just his second game with his new team and led them to a resounding 125-109 win in a Sunday Madison Square Garden matinee on national (ABC!) TV.

Just like in the 60s and 70s when Chris Schenkel, Jack Twyman and Bill Russell would showcase the best of the league on a cold winter afternoon, often in the same venue (at the time the only way someone as cable-deprived as moi could see a Knicks home game on TV), yesterday served notice that not only is Harden happier and healthier in his new slimmer Mixtape jersey (ironically with a wordmark similar to that of the uniform of era that Schenkel and company broadcast, he is also a compelling presence that, when motivated, can be a game changer in a positive way.  When he’s not, he’s just as much a game changer, but in a far more destructive manner.

Harden begged out of Houston last year when that team’s fortunes cratered.  He was overweight, lethargic, and often AWOL.  Even with protocols at heightened alert often playing in empty arenas, Harden found his way to strip clubs and kept having minor injuries.  The fact that this behavior overlapped with Morey’s departure from the franchise, and the Rockets’ lack of desire to swallow a $53 million/year salary demand, may have been mere coincidence. 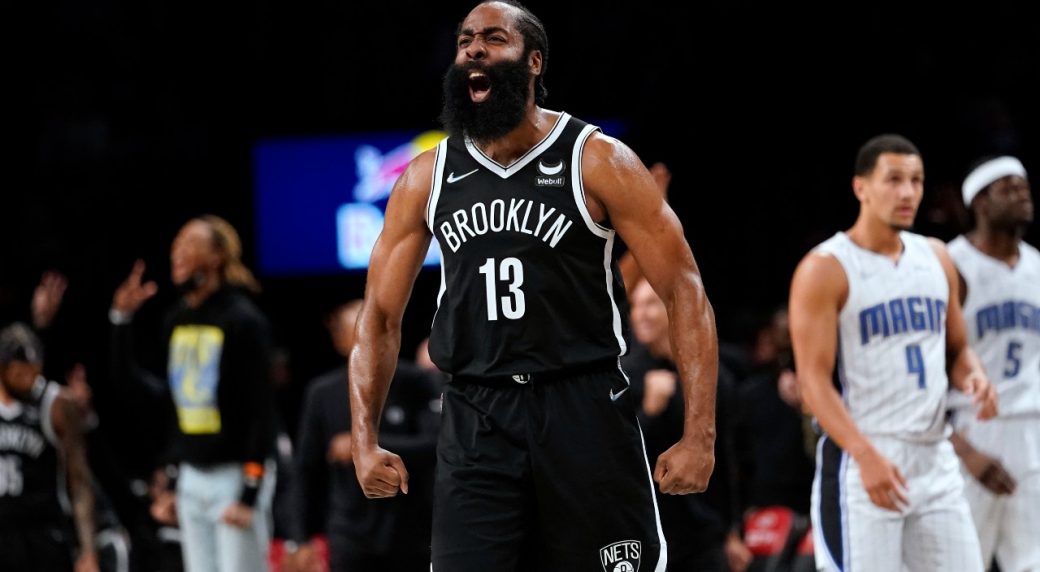 But you know what happened next.  Injuries.  Durant being an inch away from eliminating Milwaukee last spring only to be eliminated by a Greek Freak second overtime performance for the ages mere minutes later.  Kyrie’s vaccine research.  More injuries for all three of them, Harden being the healthiest in strictly relative terms.  Being teamed with Bruce Brown and David Duke, Junior.  A first-place Eastern Conference team quickly losing 11 straight and falling down to the play-in tournament level within a month.  Harden’s injuries began to linger.  And so too did his cancerous influence on a team he simply didn’t want to be around any more.

Harden is not the first disenchanted NBA star who strongarmed his way into a trade.  As Bill Simmons and Ryen Russillo discussed on Bill’s podcast last night, the NBA Saboteur Hall of Fame is populated by many others who simply became too much trouble to retain.  Dwight Howard and the Lakers (the first time).  Andre Miller and the Clippers.  Kyrie and the Celtics.  Even Kareem Abdul-Jabbar with the Bucks.  Perhaps the divorces were handled a bit less harshly, but all were divorces that had to occur, no matter what the cost to the family.

So Harden is productive and vindicated, at least for now.  Beating a fading 12th-seeded team with even deeper problems than the Nets isn’t quite that daunting a performance in hindsight.  But it’s a long way to June, both basketball-wise and psychologically.  The Sixers have to conquer the demons that haunted them last summer and prove the spectre of Ben Simmons isn’t lingering.  Joel Embiid needs to stay healthy himself.  Doc Rivers needs to be a coach capable of closing out a series without Kevin Garnett to save his behind.

Philly fans only have to look at their own history to remind themselves of how ephemeral contentness can be in their town.  As Simmons and Russillo reminded, Harden now has joined one other Saboteur Hall of Famer as being a two-time member–Wilt Chamberlain. 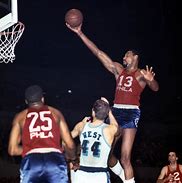 When the Philadelphia Warriors moved to San Francisco, Chamberlain, a Philly native, was so unnerved that as soon as the Syracuse Nats moved to Philly to fill the void Wilt forced the Warriors to trade him back there.  Indeed, Wilt won a title there.  Soon after, when that franchise began to unravel, and the allure of the eventual list of 20,000 Hollywood women for him to conquer beckoned, Wilt found reason to leave Philly and pushed the Sixers to trade him for a package of stalwarts including, yes, Mel Counts.   In the same year when Wilt won his second title, the Sixers began what turned into a 9-73 season.

It may not quite get that bad this time for Harden.  But it should serve notice that the window of opportunity for something to happen for this team may be a small one.  It may always be sunny in Philadelphia, but Harden’s disposition may not necessarily be in concert with the weather.