Even the most loyal and optimistic Dallas Cowboys fans were understandably nervous going into last night’s Super Wild Card game in Tom-pa agains the Buccaneers.  Despite their four-win regular season advantage, as a wild card, they were a road team.  Brady had beaten Prescott and the Cowboys seven consecutive times previously, most recently in Week 1 of the 2022 NFL season.  And, those dastardly Bucs even had the Cowboys wearing their unlucky dark blue jerseys.

But if you thought Prescott and Cowboys fans were on edge, one can only imagine where owner Jerry Jones was on the impatience scale yesterday evening.  The Cowboys haven’t won a road playoff game in 30 years. They haven’t been near a Super Bowl in 27 years.   They missed the playoffs entirely for half of the most recent 10-year span.  And Jones is now 78 years old.

So when the much-maligned Prescott, who has had to endure fans’ comparing him to his backup Cooper Rush as their QB of choice, was confronted by Jones prior to last night’s game, there was mutual need for words to be exchaned.  And as Jones told Yahoo! Sports’ Jori Epstein. this time there was an urgency–and a perceived opportunity–to try a different approach:

The Dallas Cowboys team owner knew his quarterback had thrown a league-high 15 interceptions this season, seven games elapsing since his last turnover-free performance.

The Cowboys’ philosophy was clear: Take what the defense gives us. Play smart. Don’t insist on every-play heroics. 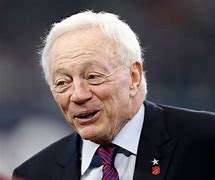 he Cowboys into the most valuable franchise in sports, per Forbes, by playing it safe. So he didn’t want Prescott to press – but he did want his quarterback to trust.

“I talked to him before the game, and all I said was: ‘Absolutely, do not not take risks,’” Jones said at 12:21 a.m. ET Tuesday, ebullient from his team’s 31-14 wild-card victory over the Tampa Bay Buccaneers. “ ‘Be aggressive.’

“There was no question before this game Dak was going to have to win it for us … to step out here and go and be the difference. He did. He was. It served notice to everybody – including his teammates, including himself.”

And with what will likely be the largest-ever audience for a Monday Night Football game, considering the prominence of the teams and the stakes involved, Prescott merely had the game of his career.

As Daniel Flick of FanNation recapped:

Of all the ways to sum up the Dallas Cowboys’ 31-14 playoff-opening victory over the Tampa Bay Buccaneers inside Raymond-James Stadium on Monday night, ESPN broadcaster Joe Buck may have said it best ..

“Dak Prescott has had a fantastic night,” Buck proclaimed following the quarterback’s fourth touchdown pass of the game.

And Prescott truly did – under one of the biggest microscopes of his career, just one week after a shocking performance in which he completed less than 40 percent of his passes as Dallas suffered a 20-point loss to the Washington Commanders.

Indeed, coach Mike McCarthy was asked after the win, “How good was Dak?”

So the much-maligned McCarthy and his top QB get to move on to San Francisco, and Brady, hoping for a homecoming to his native Northern California, will get an early start on what his next career move might be.  Brady sometimes went three seasons before losing 10 games as he did this year, and heading for 46, he looked positively inept against a Cowboys’ defense that at times has been pourous.

And awaiting in Santa Clara will be Mr. Irrelevant, the rookie sensation Brock Purdy.  Say what you will about his impressive first few games, including last Saturday’s blowout of Seattle, but Purdy’s less battle-tested than Prescott.  It will prove to be a fascinating matchup of young-ish quarterbacks, and for the NFL to have the Cowboys advancing in the post-season, it will all but guarantee excellent ratings for that matchup, a fitting coda to what football fans call “the best weekend of sports there is”.

Love ’em or despise ’em, Dak and Dallas are advancing.  Yep, how ‘bout them Cowboys???