Cheering(?) The Resurrection of Jes-US

On the weekend where worshippers worldwide celebrated the resurrection of Christ, millions of hardcore football fans celebrated the rebirth of spring professional football.  According to preliminary estimates from FOX and NBC, who jointly carried the opening game between the homestanding Birmingham Stallions and the New Jersey Generals, who like the Stallions’ other six opponents will also be based in Birmingham during the regular season, more than three million parishioners chose to worship at their respective network’s altars Saturday night, consistent with the opening game numbers that the 2020 XFL and the 2019 AAF delivered in their broadcast network debuts.

Judging by the size of the crowds in the actual stands on Saturday, this incarnation of the USFL seems destined to be far more of a made-for-TV product than the original was.  For one thing, that version filled voids in numerous NFL cities’ actual stadiums or in college stadiums in passionate smaller markets. There was an appetite and a need for live games in Giants Stadium, the LA Coliseum and Soldier Field, among others. and in cities like Tampa, Tulsa, Memphis, New Orleans and yes, Birmingham.  With a start to their seasons a month earlier than this USFL’s in closer proximity to the Super Bowl and with colder weather still ongoing in many cities, the original league had the benefit of live stadium noise and supportive network partners, particularly the then-nascent ESPN, to grow their early popularity.

Initial ratings for ABC games in 1983 weren’t NFL-sized, but they were impressive.  In New York, where the Generals opened in a late afternoon time slot visiting sunny Los Angeles in early March, that first game drew a 16.5 HH rating.  Most NFL playoff games these days don’t approach those levels in New York. (Then again, New York City teams don’t make the playoffs much these days).

And the initial intrigue wasn’t about the Generals owner, at least then.  Donald Trump was a year away from buying the team.  His buddy Herschel Walker, who had just won the Heisman Trophy at Georgia, did play.   When it comes to football (particularly then) vs. politics, Walker was in his element.  It was about the appetite for the team, tailgating and another outdoor venue to see a game at besides the moribund early 80s Yankees and Mets, at least in my town.

In today’s pandemic and virtual-obsessed world, fresh from two seasons where announcers didn’t travel and stands were populated with cardboard cutouts amplified by pumped-in noise, the absolute need for a product reliant upon these factors no longer exists.  By playing all games in two different Birmingham venues and spreading out start times so that every game will be seen nationally on some FOX or NBCU outlet travel costs are eliminated, the “bubble” concept for COVID issues more enforceable and, of course, the bar for sustained success is lowered.  For as impressive as the starts of the more recent AAF and XFL 2.0 leagues were, opening weekend curiosity began to wane quicker than the effectivity of a booster shot.  Neither newer league made it to the end of its first spring season, let alone through three complete the way the original USFL did.

And for football fans, the games weren’t bad.  The Generals, following the histories of the same-named predecessors and their “neighbor” metropolitan area teams of late. got a late field goal to take a three-point lead in the last two minutes, but Birmingham responded with a 59-yard touchdown drive of its own to steal a 28-23 win for the only true home team to play.  Some exciting and aggressive play-calling were engineered, and Generals coach Mike Riley was fully miked himself for the third quarter, giving fans a rare opportunity to hear and see real-time decision-making in a game that mattered.  For a Saturday night in April, it was fairly captivating.

Three games were scheduled for Easter Sunday but only two got played.  Houston and New Orleans also managed wins, though Tampa Bay and Pittsburgh will have to wait to make their debuts.  Concerns of severe weather supposedly were behind the decision to postpone the nightcap, though a quick snapshot of the crowd that was there to hear the decision would suggest the real cause of postponement may have been apathy. 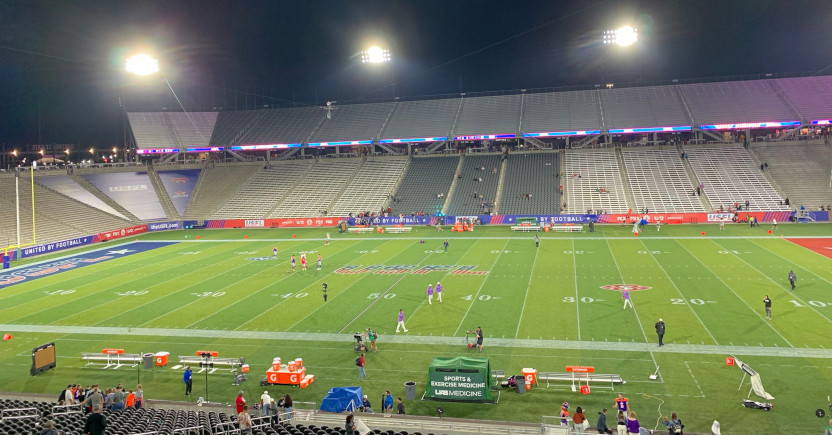 In fairness, weather was lousy and there were other mitigating factors on fan appeal for the actual stadiums.  The University of Alabama played their spring game earlier on Saturday, and in the state that’s the equivalent of an extra home game.

On the TV side, it’s doubtful the opening numbers will be repeated. Most remaining regular season games will air on the respective media monoliths’ cable networks (USA and FS1), and some NBC games will air just on Peacock.  And none will be simulcast on two linear channels at once.

But there was sampling.  Newspapers (the few that still publish with agate type) reported on them today.  Point spreads were supplied.  People won and lost money.  These days, those factors mean as much if not more to league health.

We’ll see if on the Fourth of July, the day after the championship game is to be played (in Canton, Ohio, at the site of the Pro Football Hall of Fame), if people still care as much as they did on a religious holiday.   And we’ll see if the current USFL goes out of its way to try and mount a marketing plan to attract incremental sampling going forward.  If you want people to carry about US, you have to care if they notice you.