Get your minds out of the gutter, we’re talking about the NFL playoffs.

With the weather patterns in the balance of the U.S. looking mighty wet and wintry of late, Florida has been far and away the best place for anyone to be, and for all the TV-worthiness of venues like Green Bay and Buffalo in January, meaningful games played in Florida in January provide backdrops and fan bases that make the rest of the country drool with envy.   And this weekend, two of the the state’s teans are at home and, so far, they’re living up to fans’ expectations, and defying the experts; pre-season prognostications.

Last night in Jacksonville, with a national TV audience watching, the Jaguars, yes the same team that imploded last year under the arrogant incompetence of Urban Meyer’s sabbatical from college autocracy and media dalliances, completed an unexpected turnaround by cementing the AFC South title, and a winning record, with a come-from-behind 20-16 victory over Tennessee at Alltel Stadium.  This returned the Jags to the post-season for the first time in six years, and represented only the fourth time in its history when it actually made the tournament.

The progression of #1 draft pick Trevor Lawrence under more invested tutelage this year has been the ongoing top reason for their competitiveness, but with their season on the line last night, it was the Jags’ defense that rose to the occasion.  As ESPN’s Turran Davenport and Michael DiRocco reported:

Rayshawn Jenkins and Josh Allen put the Jacksonville Jaguars back in the playoffs for the first time since 2017.

A defense that had been battered around all night finally came up with the big play: Jenkins’ strip sack of Tennessee Titans quarterback Joshua Dobbs and Allen’s 37-yard fumble recovery for a touchdown finally gave the Jaguars the lead with 2:51 to play.

The Jaguars defense made two big plays earlier in the second half — Tyson Campbell‘s interception to set up a field goal and Roy Robertson-Harris‘s sack to stall another Titans drive — but could only manage three points. The defense finally came up big when it mattered most.

Jenkins was untouched on a blitz and hit Dobbs’ arm just before he released the football. Allen fielded it on one soft bounce and went untouched into the end zone. It was the team’s 27th forced turnover of the season. They’ve scored 111 points off those turnovers, which is tied with the New England Patriots for the most in the NFL, per ESPN Stats & Information research.

So the Jags now join their neighbors to the West, the Tom-pa Bay Buccaneers, as statistically underserving division champions.  With a resonding renaissance of both the ageless Brady and perhaps one of the most underrated wide receivers in the game, Mike Evans, connecting for 207 yards and three touchdowns, the much-maligned Bucs punched their post-season ticket last week with a 30-24 conquest of Carolina in what was their win-and-in game.  Brady may never have lost eight regular-season games in a season before this, but, like the Jags, he came through when it was most needed.  And with the potential of a first-round home game against either the Eagles or Cowboys, both of whom are having issues with their consistencies, in spite of their mediocrity they cannot be summarily dismissed as a non-factor in an otherwise wide-open NFC.

Which leaves the Dolphins, also seeking a return to the playoffs for the first time since 2016, as the last of the Florida threesome to qualify, and their season to date has been perhaps the epitome of schizophrenia.  They won three to start, lost three in a row amidst Tua Tagovaiola’s first concussion-related absence, then reeled off five straight upon his return, seemingly en route to not only a playoff berth but a division title, but then the wheels came off in the midst of a three-game road-trip that contributed to a five-game losing streak they now find themselves in, as well as a second long-term injury to Tua and, last week, to backup Teddy Bridgewater that now sees them clinging to their playoff lives as they host the Jets today at Hard Rock Stadium. 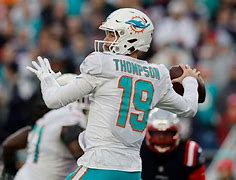 Third-stringer Skylar Thompson will attempt to give the Fins life, which under more competitive circumstances would be grounds for Fin-atics to drink margaritas heavily.  But these are the JETS, who were eliminated from playoff contention with their own sixth consecutive loss last week and will limp to a meaningless finish today with Joe Flacco, the underwhelming veteran who started their season as a temporary starter, drawing the start for what may be a game that could see their head coach, Robert Saleh, and, if not him, certainly their ineffective OC Mike Lafleur on their sidelines for the last time.  So even Thompson can succeed, particularly with a sun-drenched home crowd to support them.

But in order for Miami to grab the AFC’s seventh seed and complete the first Florida playoff triple since 2000, they’ll need some help from the Buffalo Bills, who will host New England as the Pats look to hold on to their current brass ring on the post-season merry-go-round.  But the Bills are not only playing for the #2 seed, and a less challenging first round opponent, they are now playing with the emotion of coming back after the harrowing experience on Monday night that saw Damar Hamlin fall with a heart attack that had the world praying for his recovery, which were thankfully answered as the week unfolded.  This morning, while Hamlin still lies in a hospital bed in Cincinnati, he is alive, alert, FaceTiming with his teammates and fans and, yes, he WILL be providing inspiration.  And that other Josh Allen is still pretty good, too.

So it could be a really good day for Florida football.  And for those of us who love them.  Be jealous of the weather and their fans.  I know I am.