Almost lost in the barrage of rookie debuts and superstar schmooze at last week’s NBA Summer League festivities in Las Vegas was the news, at long last, that the NBA will reward 115 surviving players from the ABA with “recognition payments” that are not a formal pension but will nevertheless give something to people truly in need. 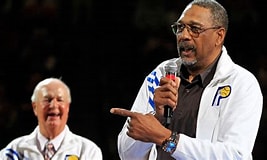 It took more than four decades of ignorance, and a couple of decades of debate, and the process was one that one of the champions of the cause, ABA great Mel Daniels, didn’t live to see to its conclusion.  Daniels, a standout for the Indiana Pacers that won one-third of the league’s championships during its history, was successful enough to start an organization called Dropping Dimes to help the plights of far less fortunate former teammates and competitors who contributed to the sport’s history and helped grow a base of lifetime fans like me.

My first year of being a basketball fan just happened to be the first of the American Basketball Association.  It was a flashier, younger counterpart to an NBA that was only beginning to evolve into something even remotely close to the global monolith it is now.  In a year where the NBA added expansion teams in San Diego and Seattle, the ABA added eleven more “professional” teams to the sport,  collectively more than doubling the number that existed only months before.  I was enraptured by the radio broadcasts of the New Jersey Americans, whose games were carried on the same weak-signaled Hackensack-based AM radio station the Mets were carried on, and was naive enough to not yet realize that games played at the Teaneck Armory were nowhere near as meaningful as the ones played at the gleaming new Madison Square Garden that opened midway through that same watershed season.   I was enthralled by the red, white and blue ball, the more colorful and progressive uniforms (once I had color TV and the games were televised, neither of which happened at the outset) and that silly revived experiment from the defunct ABL that rewarded an extra point for a shot hit from 25 feet away. (Whatever happened to that stupid rule?) So as Daniels would bring to light the struggles of such one-time familiar names to me as Maurice McHartley and Frank Card, who struggled to even pay rent and cover costs for necessary medical treatments, they were poignant and touching.  Reminded me of my favorite player early on, Levern “Jelly” Tart.   When I researched his fate, I learned he died in 2010 after many years of community service on the same Long Island where he caught my attention as a member of the pre-Nassau Coliseium New York Nets.  At least he had family and friends to support him, and what sounds like a halfway decent job.  So many others did not.  So one year, I even contributed (oh, how I yearn for those more financially solvent days!).

Dropping Dimes relied upon contributions and fund-raisers to handle requests from the likes of McHartley and Card, but it desperately needed endorsement from the league to be truly viable.  In Las Vegas last week, the league authorized annual payments of $3,828 for those select 115 who played at least three seasons.

That’s an aggregate of $24.5 million, or a little more than half of what Russell Westbrook just resigned with the Lakers for to, more than likely, either sit on the bench or continue to screw up that franchise.

Literally and figuratively, that’s a drop in the bucket.

But for some of my childhood heroes who I’m a lot closer to in lifestyle these days that the current players I worship, I’m that much happier to be a fan.