As many of you know, I regularly write a sister daily blog, which can be found at www.leblanguage.net, which often showcases the intersection of media, culture and my personal journey.  This one, which was created to express my passion for sports as well as inviting others such as the other contributors you’ve hopefully learned to embrace to do same.   Until this week, the intersection with my world was almost negligible, as I’m merely a fan and have had few connections to professional athletes.

But when I saw this sad item in news reports earlier this week, my heart sank:

Anthony “Rumble” Johnson, an MMA light heavyweight fighter who went 23-6 in his career, has died. He was 38.

Bellator MMA announced Johnson’s death on social media on Sunday. A Bellator spokesman said Johnson had been ill for more than a year.

“The BELLATOR family is devastated by his untimely passing and we send our condolences to his family and friends during this difficult time,” the announcement said.

Kevin Iole of Yahoo! Sports added details about exactly what killed him:

The cause of death was organ failure due to non-Hodgkin’s lymphoma and hemophagocytic lymphohistiocytosis, which is a rare disorder of the immune system.

Johnson’s death was tragic, but completely unrelated to a troubled life which, naturally, the New York Post shared with its readers:

Outside of the cage, Johnson was arrested multiple times. He served three years probation as part of a plea of no contest to a 2009 domestic violence charge in California. He was arrested in 2019 in Florida and charged with one count of battery/domestic battery. As part of a plea agreement, he completed a 12-hour anger management course. Last May, one day after defeating Augusto in what would be his final MMA fight, he was arrested at Mohegan Sun Casino in Connecticut and charged with identity theft for alleged use of a stolen credit cart.

Johnson’s links to reports of and arrests for domestic violence led to an indefinite UFC suspension in September 2014, while the promotion said in a statement it was “using a third-party law firm to conduct a formal investigation.” The ban was lifted that November.

So the man, thought he looked perfect from the outside, was hardly perfect inside.   I actually had held against him a more personal grudge.

You see, he was once close with a very special friend of mine.  To my special friend’s credit, the connection was never made public during his lifetime, and it’s my friend’s decision to choose to reveal it if they ever choose.   And, truth be told, I don’t know many of the details, but I do know that he lied.  And in the octagon of life, lying is the ultimate disqualifier.  At least in my friend’s ring.

The only reason I even figured out their connection was I was asked to help endorse his new line of coffee by posting on Instagram, as a personal favor to my friend, who was still trying to help Anthony out through his comeback.  (The MMA world called him Rumble; I like to refer to friends–even friends of friends–by their given names). And when I learned that, I realized that if my friend could forgive him to that extent, so could I.

So I happily posted this picture, perhaps the closest thing to a spokesmodel I’ve ever been, or may ever be. 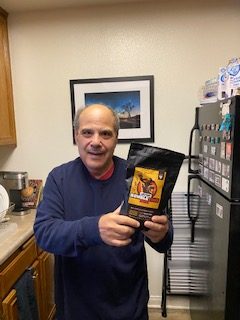 My friend has had battles, too, different than Anthony’s.  I’ve had more than my share of them lately as well.  We’re all fighters, in a way; Anthony just got paid handsomely for his.  My friend has earned money in a vast number of ways, all of them to me inspiring and inventive.  I suppose that’s one of the reasons Anthony and my friend first got close.

My friend’s got a whole bunch more coming in the next few months, one that may make my friend even more of a public figure than they are.  And, best of all, my friend helps me realize new capabilities within myself, let alone discover others that have helped me unleash still more.

It just happens to be my friend’s birthday today.  To say that I’m grateful to my friend, and the others in my friend’s past and present, would be an understatement.  They got me to love myself, and refuse to submit to anything or anyone who might want to take me down and out of my octagon.

One of my friend’s friends knows exactly I feel.  The other appears completely unwilling to even listen to me.  I know my friend well enough to know Anthony undoubtedly expressed his, and my friend did to him as well, before he so prematurely left this mortal coil.  I pray he left at peace, and I’d like to believe my friend played even a small role in that.

We all ultimately are forced into submission by the Grim Reaper.  It shouldn’t have been as swiftly in Anthony’s case.  But we’re not the commissioners of our octagons, and there’s no appeals process.

You’d think I actually had met Anthony.  Nope, never happened.  There was once a possibility, but he was otherwise preoccupied when it was supposed to happen–as it turned out, preparing for that Bellator fight that proved to be his last.  Beyond that point, clearly there were other impediments.   I suspect if I had actually had met him, I’d be grieving as much as those who did, or even followed his impressive career, are now.

So I’m merely sad about the missed opportunity, and far sadder for his family and friends.  My friend is sad, but also at peace, and working like crazy to continue to fight their own battles.  If nothing else, I’m inspired to fight mine that much more, and not submit until the Grim Reaper rings the bell.  And my own submission has most definitely been pushed off by my friend–Anthony’s friend–and those who are connected to that world.

So I’ll take the liberty of adding his wishes from heaven to mine, fairly secure in knowing we all wish he was still hear to offer them personally, and I’ll hope you’ll join me in adding yours: 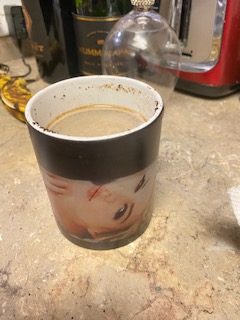 Happy birthday, special friend.   The coffee is great, but the friendship is far more upifting.