An Ovi-Achiever? Or A Potential Pariah?

Alex Ovechkin has been playing hockey in the United States–indeed, in its capital city–since 2005.  He has largely been known best among fans and within the Beltway among its rabid core of fans who have learned to appreciate his talent, zeal and prowess in the same manner that Ted Williams achieved in Boston and Michael Jordan in Chicago, though his total number of Stanley Cups (one) most closely resembles Williams’ track record than Jordan’s.  And through the team’s first 31 games this season, with his Caps mired in sixth place in their division, there seems to be little chance he will improve upon that.  So his supporters are more focused than ever on his individual accomplishments, which last night reached yet another milestone.

As Samantha Pell and Barry Svrluga eagerly reported to their Washington Post readers this morning:

Of all the things we have learned about Alexander Ovechkin in the 18 years since he started scoring goals for the Washington Capitals, perhaps the foremost is this: He will choose the most dramatic way to reach whatever milestone lies ahead. He entered Tuesday night’s game at Chicago three goals short of 800. He faced the Blackhawks on the road, and then had three straight home games. Get your tickets. Eight hundred had to happen at the corner of 7th and F Streets.

So what awaits at Capital One Arena — perhaps Thursday night against Dallas, or Saturday night against Toronto, or certainly by Monday night against Detroit — would be Ovechkin’s 801st goal, which would tie Gordie Howe for the second-most in an NHL career. That pre-Christmas stretch — which includes a quick trip to Ottawa, then a Dec. 23 home game against Winnipeg — could well include No. 802, which would leave Ovechkin with only Wayne Gretzky’s 894 ahead of him. The accomplishments are like stocking stuffers at this point.

Ovechkin is ascending into what was seen as insurmountable territory, and once he passes Howe he will begin a Bataan death march assault on the game’s greatest record, set by arguably the game’s greatest player of all time.  In many ways, Wayne Gretzky is to this sport and North Americans what Babe Ruth was to baseball.  nd he’s very much alive to see Ovechkin chase his record, which will likely happen sometime before the end of the 2024-25 season.  It will be a story that will grow, and ultimately reach its zenith just as the presidential election is being held, with his chase perhaps providing one of the few respites from what will likely be a highly politically charged and polarizing time.

But as Ovechkin’s fame and popularity rise, so too will come opportunity for people to remind those that like him that he is a Russian-born player who has yet to condemn his native land’s President, Vladmir Putin,  Indeed, at one time, Ovechkin endorsed him.  As USA Today reported this March as Putin’s war on Ukraine mounted, Ovechkin seemed to try and distance himself. 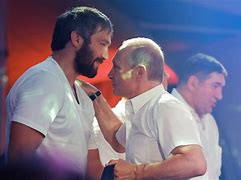 In 2017, Ovechkin started a social media movement called Putin Team during the Russian leader’s re-election campaign. The Instagram post included a photo of him and Putin.

“Being part of this team makes me proud and it’s similar to the feeling you get when you put on a Russian national team jersey, knowing that the whole country is rooting for you,” he wrote in Russian.

“I’m confident that there’s a lot of us who support Vladimir Putin,” Ovechkin wrote in the post. “So let’s come together and show everyone a strong and unified Russia!”

He later told reporters he wasn’t trying to be political with the post.

“I just support my country, you know?” Ovechkin said. “That’s where I’m from, my parents live there, all my friends. Like every human from different countries, they support their president.”

Ovechkin received a wedding gift from Putin in 2016 and a telegram from the Russian leader was read at the reception.

Asked if he supported Putin, Ovechkin said, “He’s my president but … I’m not in politics. I’m an athlete and how I said, I hope everything is going to be done soon. It’s a hard situation right now for both sides. … I’m not in control of the situation.”

Well, the war is still ongoing, Putin is still very much in charge and Ovechkin has not offered an update on his feelings.  He’s already ticked off a few of his peers and journos:  Per Yahoo! Sports:

Hall of Fame goaltender Dominik Hasek was harsh, calling Ovechkin an “alibist,” a “liar” and a “chicken (expletive).” He called for the NHL to expel Russian players. A Washington Post column called Ovechkin’s comments a “missed opportunity.”

Don’t think there aren’t plenty of Ukraine supporters that would be less than happy to realize all this,  And a few might be fanatical enough to voice concerns that an NHL all-time record could be held by a foreign-born supporter of a fascist ruler.  Those concerns could turn into something worse.

After all, far too many people didn’t want Hank Aaron to break Ruth’s home run record.  Aaron endured death threats and taunts as he drew closer.  It’s entirely possible that should Putin and his horrible war continue, Ovechkin could be in for more of the same.

When all of this started, indifference and skirting the issue may have been a wise choice.  It can’t be now that he’s at the precipice of immortality and Putin’s still in power.

Ovechkin left that world behind and bodes to be honored forever by a world that mostly detests Putin and his policies.  It is high time that he comes out once and for all and denounces him.  He can do it gently and perhaps with empathy; one can’t fully forget one’s past.  But he needs to.

He’s already hockey’s Derek Jeter.  He could be its Babe Ruth.  He shouldn’t be its Hank Aaron.

He needs to bury any doubts once and for all and put this biscuit in the basket.

And then we can all root like crazy as he marches toward immortality, and perhaps more quickly denounce this picture:

Oh, you forgot who was running the country in 2018 when the Caps won their title?