A Place For The Sun

On a night when the second half for the Los Angeles Rams was an illustration of complete collapse, the Connecticut Sun demonstrated to a far smaller audience how to actually close out a game.

With all five of its starters scoring in double figures, the Sun used a 25-5 fourth quarter, including the game’s final 18 points, to oust the defending champion Chicago Sky 72-63 in the deciding fifth game of the WNBA semifinals on the Sky’s home court.  As NBC Sports Chicago somberly recounted:

Trailing 63-54, Connecticut took over. DeWanna Bonner was fouled after making a layup by Kahleah Copper with 3:46 left. The two players exchanged words and that seemed to energize the Sun.

Jones scored inside to put the Sun ahead with two minutes left, hitting an ensuing free throw for a three-point lead.

A pull-up jumper by Courtney Williams with 47.5 seconds remaining gave the Sun a five-point cushion, and Bonner knocked down four free throws to put the game out of reach. 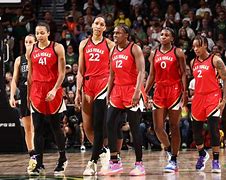 So instead of the Sky seeking to become the first WNBA repeat champion in 20 years, on the heels of their first-ever, an intriguing matchup that will see the league crown its tenth different champion in its 26-year history.  The Sun have been to three previous finals, most recently in 2019, but have come up empty each time.  Their opponents, the Western Conference champion Las Vegas Aces, lost in the “wubble” in Bradenton, Florida during the 2020 pandemic, as well as in 2008 when they were the San Antonio Silver Starz (try saying that three times fast without lisping!).

These particular franchises represent two of the three current cities fielding teams that do not have NBA counterparts (Seattle, the third, did have the SuperSonics as its partner when the league began).  Both of these teams play in arenas tied to casinos–the Sun are named for the Mohegan Sun that essentially bought their way into the league as an expansion franchise, tying into to a state-wide appetite fueled by the immense success of the University of Connecticut’s women’s basketball program.  Indeed, many Huskies have gone on to strong careers in the league, many in Connecticut.

As for Vegas, they are perhaps the fastest-growing major market in the country, and evolving as a place to live as well as a place to party.  The NHL Golden Knights have thrived, the Raiders have finally found a city and a stadium that adores them, and the Aces, now owned by Raiders owner Mark Davis, have captured the attention of a city that has hosted an NBA All-Star Game and draft and will likely get a franchise at some point, with no other than LeBron James rumored to be involved.   If and when they do arrive, they will be looking to capture some of the Aces’ fan base, not the other way around.

This has been a very successful season for the WNBA.  Per its website:

— Combined viewership for the WNBA across ESPN Networks (ABC, ESPN, ESPN2) and the CBS Television Network was up 16 percent over the 2021 regular season, averaging 379,000 viewers, making it the most-viewed season for the league’s television partners in 14 years.

And key drivers of that popularity are the franchises that are THE pro basketball teams of their areas, not just a summer filler.

So it’s appropriate that Connecticut and Las Vegas will square off for the title beginning Sunday afternoon.  Particularly for Connecticut, which has no other major league professional team.  There’s definitely a place for THIS Sun, and last night, they earned it.  The Rams could learn from them.