A Giant Step Back Toward Success

When the Green Bay Packers finally gave in to the pleas of the NFL, and their fervent European fan base, to allow a home game of their to be relocated to London, they chose today’s tilt with the New York Giants as the one least likely to hurt their quest for a second title for Aaron Rodgers.

The advantage the Pack get is most significant when the tundra at Lambeau Field is indeed frozen, and against key divisional opponents it is all the more meaningful.  Based on last year’s laughable efforts, an October early window game against the G-Men didn’t seem very appealing.  Even the prior week’s interconference matchup against a depleted New England Patriots team, which could have been moved to the same Tottenham Hotspur stadium they played in today, looked like a more compelling tilt, what with the chess match of Bill Belichick at work despite playing with a board consisting mostly of pawns.

Daniel Jones?  Next year’s Sam Darnold at best.  Brian Daboli?  That “other Brian” who Belichick forgot was also a candidate for the Giants coaching job when he gossip-texted with Brian Flores last winter?  Saquon Barkley?  OK, there’s a talent, but if history is a barometer he could likely be injured by Week Six.

Well, the Packers, and the whole darn world, now know who these Giants are, and why they’re in a better post-season position today than Rodgers and Green Bay are. 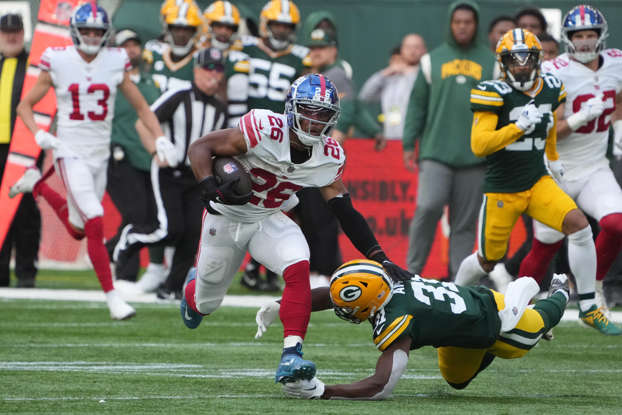 Behind Jones, who played arguably his most complete game in his five-year pro career despite an ankle injury that threatened his very presence, a spirited defense, that shut down a potential game-tying drive by Rodgers with two crucial stops with roughly a minute to play, and a whole bunch of substitute receivers and running backs spelling starters and, yes, even Barkley, who was hampeted by a shoulder injury, the Giants stunned the Packer-partisan crowd with a 27-22 upset that now has them at an almost inconceivable 4-1 record., in step with the league’s best, and their conference arch-rivals, the Philadelphia Eagles.

And I, for one, am not not all that surprised, but, indeed, see it as someone of an omen.

The Giants have defied the odds twice before this century as wild card teams who won Super Bowl titles in both 2008 and 2012 with road playoff victories in Green Bay, in January, on frigid nights in far worse weather than they had on the Spurs’ pitch today.  But those teams did have Eli Manning as quarterback, and a lot more talent and experience than the gritty group responsible for today’s win.

Daniel Bellinger and Darius Sills as receivers?  Gary Brightwell at running back?  Yes, even this abashed Giants fan didn’t really know much about them, and I HAVE been watching this year.  Compared to David Tyree, these were practically Pro Bowlers.

Now the whole world knows who they are, and who these Giants could be.  And I’m thinking fondly back of that second playoff win in Green Bay, one that occurred on the Sunday before I finally got a call from a major network to offer me a top executive position, a salary commensurate with my abilities and, at least then, saved me from financial ruin.

Things are way worse now.  There’s a couple of decisions hanging out there, and while I’m confident, after nearly 1000 days of futility, it’s often difficult to remain optimistic.  Sunday football is one of the few distractions I have, and the Giants, especially of late, haven’t provided much relief.

This Sunday was a blessed exception, and a throwback to better days.  I know I feel better rocking a GIants jersey today.  I sure hope I’ll feel even better rocking a dress shirt again soon.

Daniel Jones has been as maligned as any quarterback in the NFL, and almost as much as any Giants quarterback in memory–and I’m including Joe Pisarcik and David Brown.  But people named Jones have remarkable resiliency, and today he shut up his naysayers, and yes, even Aaron Rodgers.

If this could happen, anything’s possible.  The Giants have a long way to go to even winning their division, let alone getting a championship.  But today was a huge step back toward respectability and relevance.

I’m right behind you, Jones.