The presence of the Philadelphia Phillies in a World Series, such as will be the case with the one that begins tonight, hasn’t been common in baseball history.  This will only be the eighth time in 120 years that the Phils will be playing in an October classic.  One of the more memorable ones was the surprising success they saw in 1950 with their “Whiz Kids”, winning the pennant for the first time in 35 years and upsetting the defending champion Brooklyn Dodgers with a walk-off 10th inning home run by Dick Sisler in a season-ending game that, had the Dodgers won, would have forced a playoff.  When Bryce Harper launched his eighth-inning blast that secured the Game 5 victory against San Diego last Sunday that secured their berth, it evoked memories of the 1950 team with historians and senior citizens overjoyed with the similarities that a sixth-seed, third Wild Card emerge as National League champion.

That’s not all the 2022 Phillies have in common with their 1950 counterparts.  Neither one has a single U.S. black player on their roster. Neither do the Houston Astros, which makes this the first World Series in 72 years that neither team will be so represented.  But they do have one of the two current black managers in the game, Dusty Baker, in charge, and he’s as auspiced a spokesperson on this subject as anyone alive.  With more than 50 years in the game, beginning as a young teammate of Hank Aaron on the 70s Braves where he personally saw Aaron endure death threats on his way to breaking Babe Ruth’s all-time home run record, he has the perspective of seeing the game evolve to that point from the game he fell in love with as a Southern California native who grew up admiring a Dodgers franchise that broke the color barrier in the first place, and with a diverse group of players and coaches that followed that expanded the game’s popularity.

To be sure, there is a significant presence of players of color on both squads.  Baker’s Astros have 14 Latin American players on their roster, including stalwarts like Jose Altuve, Yuri Gurriel, Yordan Alvarez, Luis Garcia and others.  The Phillies have five, including sparkplug Jean Segura.

But in the U.S., where economics and polarizartion have widened the current race chasm to a greater extent than in recent generations, there is a struggle for appeal.  Youth baseball programs have diminished in inner cities, and with less than 10% of the major league rosters in total having such representation, there’s little incentive for those who might be interested to those programs that are still around to sign up,

But in an interview with Yahoo Sports!, Baker did provide prospective and, indeed, some hope:

“...there is help on the way. You can tell by the number of African-American number one draft choices. The academies are producing players.

“So, hopefully, in the near future we won’t have to talk about this any more or even be in this situation.”

What provides hope to Baker for the future is this year’s MLB Draft, where four of the first five players chosen were Black for the first time in its history.

Druw Jones, an outfielder and the son of former MLB star Andruw Jones, was selected second overall by Arizona and underwent left labrum surgery in August.

Kumar Rocker, a 22-year-old right-handed pitcher taken third overall by Texas, is the son of a former NFL defensive tackle who is playing in a fall development league.

Temarr Johnson, 18, is a shortstop taken fourth overall by Pittsburgh who batted .222 with a home run and six stolen bases at the starting level of developmental play.

I was in downtown Los Angeles watching the draft unfold, and I did see quite a number of younger black fans in attendance, cheering wildly for each pick, and crying along with these young talents’ families in a similar way than what they would often see on NFL and NBA draft nights. 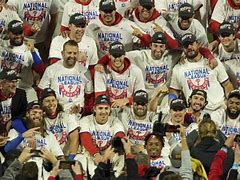 So I’m down with Dusty’s optimism, even if the current Phillies team looks disturbingly too much like the one that appears at the top of this entry.

Keep this in mind, Phillies fans.  That team got swept by the Yankees.

I don’t think they want a repeat of that result.

Nor should major league baseball want a repeat of this picture anytime soon.

Efforts are supposedly being redoubled on programs such as RBI, and they would be smart to borrow a page from the NBA and boost the profiles of the younger players that dominated the draft with such a fan base of opportunity.  As they attempt to bring a younger, digital-centric generation into a game they are determined to make faster-paced, particularly as the generation that grew up ages up and out, it is both morally and fiscally conscious to make sure diversity and representation is more evident than it will be over the next week.

I’ll enjoy the Series, to be sure, as I have for decades.  I sure hope I might not be the dinosaur I fear I’m becoming going forward.   An end to anything resembling 1950 would be a start.