A Chanukah Miracle, A 6’7″ Forward From Yeshiva University

I probably was aware of how the potential of Ryan Turell as a professional athlete long before many sports fans were.  His father Brad, back when both of us were younger and wilder, were both trusted executives working in the shadow of the iconic Barry Diller during the early days of FOX Broadcasting.  Although I worked only for the owned-and-operated stations, I was a regular attendee of their storied staff meetings, which Brad, as head of public relations, often organized for his two-time boss, Jamie Kellner, the founding president of both FOX and The WB.  Diller oversaw everything and took gleeful pride at pitting colleagues with occasionally opposing agendas in situations that required teamwork, often gleeful at the arguments that often arose.   Brad and I were among the most outspoken and opinionated and among the least shy.  But, as always, I enjoy passion, whether or not it’s correct.  I always respected him immensely, and I believe at some level he did me.

So years later, when we caught each other’s eyes in adjoining Dodger Stadium suites, I was quite happy to see him, a notch greyer than last I saw him, and sporting a wedding ring.  He had a beautiful wife and an energetic young son with him.  And, to my surprise, a yarmulke on his head.

I didn’t even know Brad was Jewish, but I guess years around Diller could drive anyone to seek a higher calling,.  No, of course I’m kidding.  As Wikipedia recounted from an ESPN profile, Brad’s journey was much more personal and organic:

As a child, his father Brad had played basketball against future NBA player Kiki VanDeWeghe, in college he had played basketball as a guard at the University of California, Santa Barbara, and as an adult he had performed public relations work for VanDeWeghe.[1] The elder Turells’ later choice for their children’s education had its roots in the journeys both took to Orthodox Judaism. Brad, who had been raised as a Reform Jew, began studying with an Orthodox rabbi in his late twenties, at the time intending only to learn more about Judaism, but he eventually embraced Orthodox Judaism. Laurel, the daughter of Southern Baptist evangelical singers, was dating Brad at the time. After she met Brad’s teacher, she eventually chose to convert to Judaism, and became Orthodox at the same time as Brad.[2]

So when I saw Brad so transformed and happy, I had to come over and express my congrats. As one would asl of any Jewish Dodger fan, I motioned to Ryan, clad in a Dodger jacket, if he would be the next Sandy Koufax.  Brad shook his head and said “This one’s a basketball player”,  He then threw a small basketball into his stroller, which Ryan easily caught with two hands.  I observed “Well, he’s got the pick and roll down already.

Over the next two decades, Ryan got a lot more basketball talent.  He was a standout at Valley Torah High School, an elite Jewish private school in Los Angeles, and could have easily gone on to a larger college and be able to compete for starting time.  But, as a later ESPN story on Ryan reminded, “the Turell children “grew up in a household with twin focuses: basketball and Judaism.”.  So it was a fait d’accompli than Ryan followed his older brother Jack to Yeshiva University in New York City.  Jack played for the Maccabees, but Ryan eclipsed his talent.  Not only did Ryan make a bigger impact on the team, he became the best Division III player on one of the best small college basketball teams in the country.

In 2021–22, as a senior, Turell averaged 27.1 points (leading all levels of college basketball), 5.5 rebounds, 2.7 assists, and 1.4 steals per game.[9][10] He shot .587 from the field, .468 from three-point range, and .761 from the line.[9] He was named NABC DIII National Player of the Year, NABC DIII All-America First Team, NABC All-District Atlantic First Team, NABC District 3 First Team, Skyline Conference Player of the Year for the second season in a row, and Skyline Conference All-First Team for the third time in his career, D3hoops.com Region 3 Player of the Year, and D3hoops.com All-America First Team for the third straight year.[9][10]

While that wasn’t quite good enough for the NBA Draft, it was good enough for the Detroit Pistons to draft him for their G League team, the Motor City Cruize, which plays its games in the cozy on-campus gym at Wayne State University.  And last month, Turell the forward made history in the Jewish newspaper of record, The Forward.  As Louis Keene wrote:

Turell, who wore a blue yarmulke emblazoned with the franchise’s logo, entered to an ovation for the final 3:40 of the home game, which his team, the Motor City Cruise, was then losing by 25. But Turell, who, if he graduates from the minor leagues will be the first Orthodox Jew in the NBA, still managed to showcase his hustle, personality and ability to create his own shot — even if the only one he took last night missed. 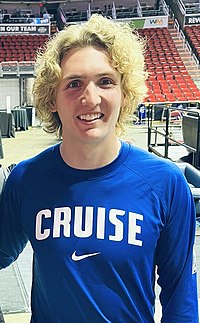 Since then, Turell’s gotten off the schneid, though with not all that much success for himself or the Cruize.  He’s averaging a spartan 3.5 points per game, playing in half the games of a team that currently ranks among the G League’s worst at an anemic 3-13.  But the parent Pistons aren’t much better, last in their division at a moribund 8-23 and having just lost their former top draft pick Cade Cunningham for an extended period.  Both franchises have needs.  It wouldn’t be the worst idea to phase Turell into more playing time soon, and possibly, even give him a shot at making the NBA.

Turell’s already stated, despite how many Orthodox choose to observe the Sabbath, he will indeed play on those evenings.  As Keene’s article concluded:

Turell told ESPN in March that if he was drafted by an NBA league he would play on the Sabbath, but would walk to games and practices scheduled for Shabbat and otherwise continue to observe the laws of the Jewish day of rest.

Tim Tebow drew a lot of attention when he tried to play professional baseball from an evangelical world which has felt disenfranchised by professional sports yet one Tebow openly embraces.  The Mets got a lot of attention in less competitive times with his presence.  As Turell progresses, he would be a far more intriguing storyline than the comeback attempt of Kevin Knox II.

He’s not quite ready for the big time on Chanukah.  Perhaps he might be ready by Passover?  Or, as a pre-season tease, next Rosh Hashanah?

The fact that he’s made it this far, yarmulke and all, is its own miracle.  And, just like the earlier era Maccabees, Turellmay have a few more miracles in his oil can yet.